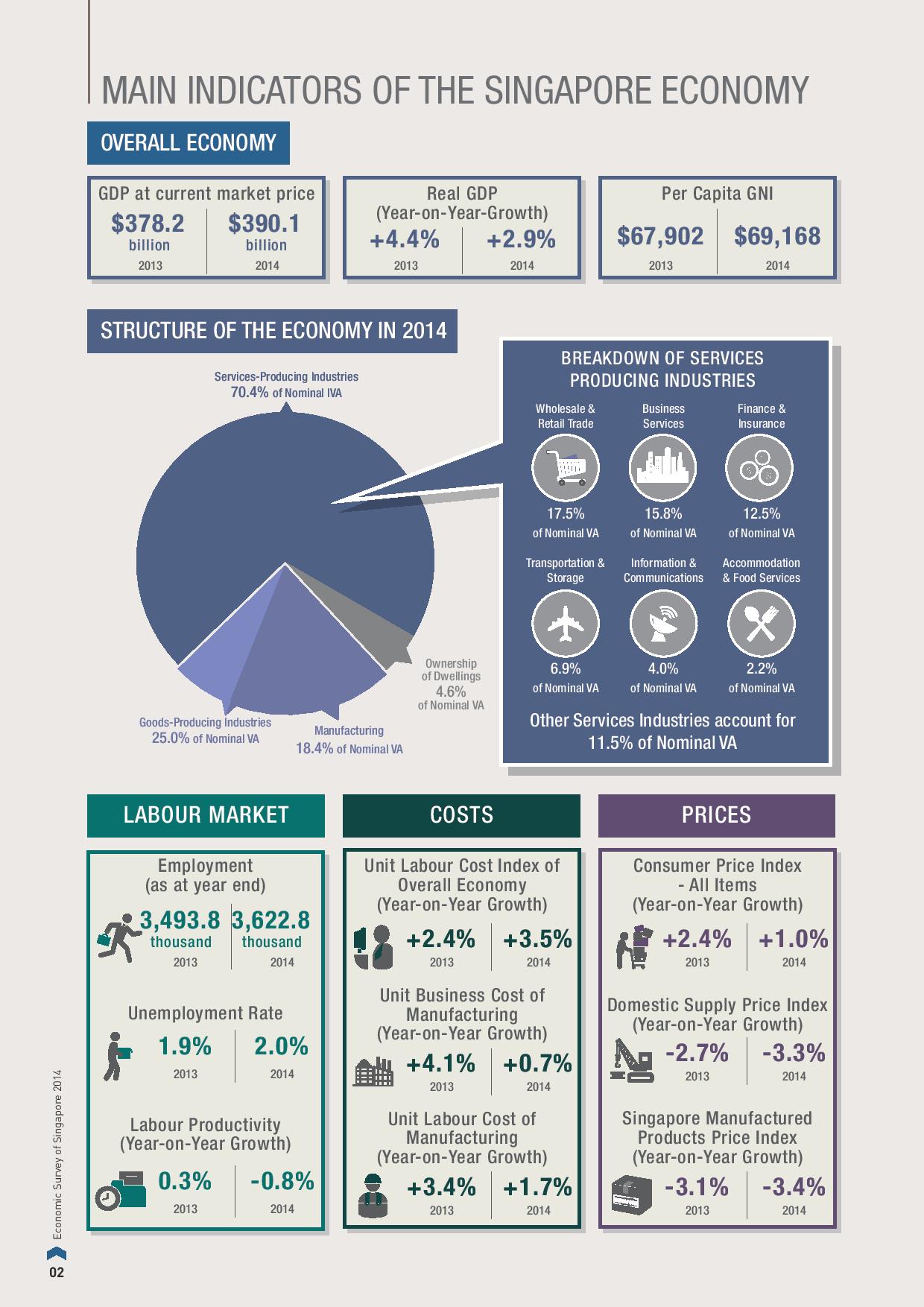 The economy grew a “moderate” 2.8 per cent in 2014 as productivity gains remained weak for a third straight year, Prime Minister Lee Hsien Loong said on Wednesday.

But incomes continued to rise, he added in his yearly New Year message.

The growth rate was a tad lower than official forecasts of “around 3 per cent”, an outcome that seems to underpin Mr Lee’s call to redouble efforts to raise productivity so that salaries and the economy will keep growing.

Eurozone is expected to remain weak, due to sluggish labour market conditions and deflationary pressures. China’s growth is also expected to ease further in 2015 on the back of sluggish real estate activities, although the slowdown is likely to be contained. Furthermore, while the recent plunge in oil prices could benefit oil-importing economies, it has dampened growth prospects in oil-exporting economies.

At the same time, the external outlook remains clouded with significant downside risks and uncertainties. In the Eurozone, slow growth and persistent low inflation have heightened fears that the Eurozone will fall into a deflationary spiral. In China, there is the risk of a sharp correction in the real estate market, which could have severe negative spill-over effects on construction and real estate investment activities. This could in turn lead to a sharper-than-expected slowdown in the Chinese economy. In the US, there are lingering uncertainties over when and the pace at which the Federal Reserve (Fed) will raise the Fed Funds rate. An unexpected tightening of monetary conditions could weigh on US’ financial markets and business sentiments. Finally, with the sharp correction in commodity prices and recent capital outflows from emerging markets, there may be fiscal and financial stresses in some emerging market economies.

Amidst this challenging global economic environment, externally-oriented sectors such as the manufacturing and wholesale trade sectors are likely to face headwinds. Domestically, the labour market is expected to remain tight, with low unemployment and rising vacancy rates. As a result, labour-intensive sectors such as construction, retail and food services may see their growth weighed down by labour constraints. Nonetheless, other domestically-oriented sectors such as business services are expected to remain resilient.

A.4. The global outlook for 2015 is uncertain. The US continues to recover. Europe’s growth remains weak, and the Eurozone is facing new uncertainties. Emerging Asia including our own region is seeing the effects of a slowdown in China.

A.5. The current global environment is not, however, just a temporary challenge. We may see prolonged sluggish growth in the advanced world, as well as continued consolidation in China’s growth as it reforms and rebalances its economy. We should not count on significantly stronger global demand over the medium term.

A.6. CPI inflation fell to 1% in 2014, largely due to the fall in COE prices and the correction in the property market which has reduced imputed rentals.1 Food prices have been rising, especially raw foods imported from the region. However, we expect overall inflation to be close to zero in 2015.

A.7. Our labour market remains close to full employment. The unemployment rate for citizens remained low at 2.9% in 2014. The tight labour market has also led to further increases in labour force participation rates, with more women working and more older workers staying on in employment.

A.8. Incomes have continued to rise, outpacing inflation. The median Singaporean worker’s pay grew by a slower 1.4% in real terms in 2014.2 But added up over the last five years, the median worker’s pay grew by 11% after adjusting for inflation. Median household income per member grew faster, at 18% over the five years in real terms, because besides higher pay, more Singaporeans have jobs.