This article is related to foreign exchange in JC 2 Economics. This chapter is not taught in all JCs but….it is fundamental to understanding International Trade and protectionism. It is also important for understanding how trade will affect the aggregate demand where AD = C+I+G+X-M.

What is a currency war? How is it related to foreign exchange and our economy? How does it affect you? 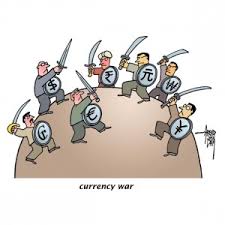 TOKYO: Japan’s top financial diplomat has rejected claims that the country’s new government orchestrated a drop in the yen, which critics have warned could spark a global currency war.

“Japan has no intention whatsoever of competitive devaluation of the yen,” Takehiko Nakao, vice minister of finance for international affairs, said in an interview with the Wall Street Journal published Thursday.

“Let me reiterate that the recent depreciation of the yen should be regarded as a correction from the one-sided and excessive appreciation that took place up to last year.”

Nakao also said policy moves from the Bank of Japan this week — including an open-ended easing programme similar to one launched by the US
Federal Reserve — was not part of a plan to manipulate the unit.

The new measures, which include setting a two percent inflation target, were aimed at tackling Japan’s long-running deflation and breathing life into the world’s third-largest economy, the minister said.

“It shouldn’t be criticised even if a monetary policy — which aims at ensuring growth and price stability of any country — has a certain impact on exchange rates as a consequence,” he was quoted as saying.

The Japanese currency soared to a record high around the 75-level on the dollar in late 2011 and remained strong through much of 2012, hammering exporters as the disaster-struck country struggled to cement a recovery.

Japanese authorities have intervened in currency markets on several occasions in a bid to tame the unit’s surging value, with little success.

But the currency started a rapid decline after Japan’s new conservative government swept to power last month on a promise to fix the economy with big spending and to pressure the Bank of Japan into more aggressive easing, which tends to weigh on the unit’s value.

This month, the yen’s steep tumble has sparked criticism from the head of the US Federal Reserve Bank of St. Louis, a Russian central banker who warned over a global currency war and the head of Germany’s Bundesbank.

On Monday, Jens Weidmann said the result of government meddling in central bank policies, citing Japan as an example, “could be a much stronger politicising of exchange rates”.

“Up to now the international monetary system has weathered the (financial) crisis and avoided a devaluation race and I hope very much that will remain the case,” he added.

The monetary easing policies undertaken by the central banks of numerous industrialised countries during the crisis, primarily aimed at unfreezing financial markets, have also tended to lower the value of their currencies.

A number of emerging nations such as Brazil were unhappy and spoke of “currency wars” that would see nations work to bring down the value of
their currencies, possibly for trade gains.

China has been a regular target of criticism that it manipulates the value of its yuan currency to prop up the country’s export-heavy economy.